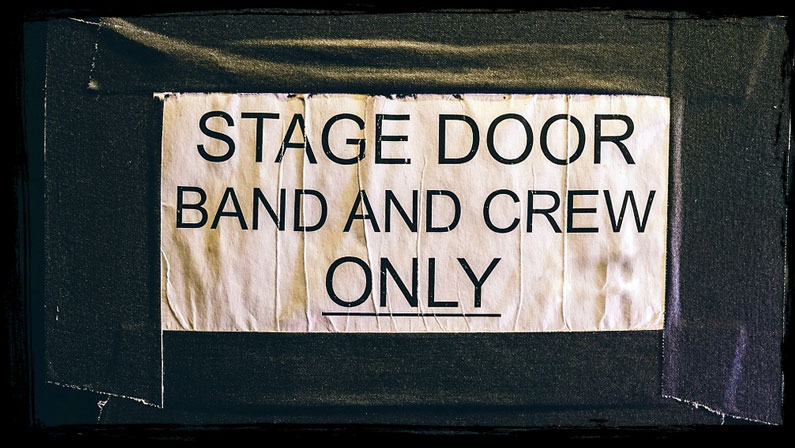 Breaking up the Band

We first see Jenna Donnelly onstage in an empty night club. Her band is meeting to practice days before a big show. She sits with guitar in hand and legs folded under her, playing for no one but herself.

Her Strat glistened candy apple green under a single spotlight. She tapped time, glancing down as she strummed the opening chord. Fingers deftly shivered a riff. Her grip shifted, another chord unbound…

The headphones over her ears drown out everything. She never heard Ned approach. He stepped over the cables trailing back to the amp, set down his bass, and took a seat behind her.

When Ned walks in he’s feeling the pressure of the show. The band’s lead singer hasn’t been returning calls. It appears once again that Grant has bailed on their practice set.

Her voice wasn’t overpowering, but damn it was pleasing. Ned couldn’t hear the full play of guitar, just strings unamplified, as he watched…

As Ned stared out at the club, her voice smoothed over the jagged edge of his nerves. He knew she wouldn’t be nervous at all. That was Jenna. Stick a guitar in her hands and the rest of the world disappeared.

The unguarded moment doesn’t last long as Peck, the drummer, makes his entrance in dramatic fashion.

Head bobbing, he twirled a drumstick in one hand, crashing an air cymbal with the other. He pounded a scattershot of beats along the hallway that led onstage. He must have suddenly realized what song Jenna was playing because he spontaneously exploded.

With that, Jenna snapped back to reality. Either she heard the eruption or saw Peck pogoing like a lunatic. She glanced back to Ned. Unspoken amusement passed between them. With a smirk, she continued playing.

Just like that we get a snapshot of the dynamic trio. It’s obvious why the band works. We see Jenna, the driving force, move effortlessly from creative isolation to embrace camaraderie. The enigmatic Peck acts as a constant disruptor, pushing them all of the mark. And finally we see his foil Ned, whose good nature is the glue that holds together Spaceboy with all its aberrant personalities.

“What?” he asked, bristling.

“Freaky goodness,” Peck corrected and strutted past. Glancing about, he asked, “We ready?”

“You see Grant around here?”

Peck surveyed the stage and beyond to confirm. “Ah shit. You gotta be kidding?”

And that’s where it all comes to an abrupt halt. The band isn’t a trio. The missing member, Grant, has an agenda of his own. He didn’t make practice. Will he put in an appearance at the show or blow the opportunity the band has been working toward for so long now?

The black walls of the isolation booth were covered in sound deadening material. There was a window to the lounge, but it was one-way offering only his reflection in the multi-paned glass. He stared at the hardwood floor, only paces across. He’d measured the confined space many times and liked it less with each repetition.

Elaine stood in the doorway to the control booth with her fiery hair pulled back to a ponytail. She was dressed down, wearing a white tunic with red and gold embroidery at the neckline. Obviously, she was making every effort to project comfort.

“You ready for this?”

“I better be,” Grant replied, feeling nervous but trying not to sound it. “Contracts are signed. There’s no backing out now, right?”