Flipping the Script on Guns

Something remarkable happened in the wake of tragedy in Parkland, FL. America witnessed a generation waking up politically, and it’s been fascinating to watch teenagers snatch the mic back from the extreme right.

There have been so many defining moments, from Emma Gonzalez calling BS at a rally right after the shooting, to Cameron Kasky putting Marco Rubio on blast at a CNN townhall meeting, to Sam Fuentes throwing up during her speech before continuing unabated.

These teenagers are exceptional, each and every one of them.  It would be a mistake to underestimate what these students from Marjory Stoneman Douglas High School will accomplish through their activism.  Clearly the playing field has changed in the gun debate because of them.

In the Shadow of Gun Violence

Simply put, young people today have every right to be pissed at the world.  They’re inheriting a shitty deal at every turn, from college debt to a broken healthcare system to the looming catastrophe of climate change.  Millennials earn 20% less than their baby boomer parents did at the same age.

It all sucks but most immediate among the problems this generation faces is the threat of gun violence.

Last year William P. Gardner, an epidemiologist at the University of Ottawa, plotted the frequency of mass shootings in the US. Data illustrates that tragedies like Parkland are happening at an increasing rate and are becoming bigger and bigger events.  All of this seems so obvious given the floor to ceiling coverage of cable network news. 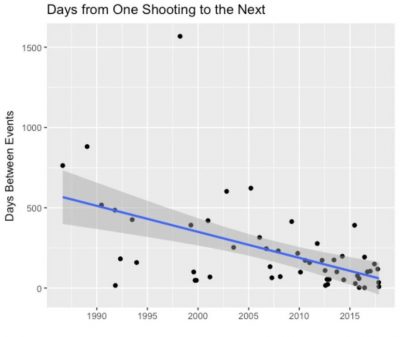 I know from experience that students these days participate in lockdown drills on a regular basis, monthly in a lot of schools.  Quite literally kids are growing up under the threat of gun violence.  With shootings happening every few days, it is a disturbing new normal for them.

This reality, of course, should never be considered unacceptable.  It breaks my heart every day I walk my kids to school and have to stare at that flag flying at half mast.  My personal experience supports the data; this is happening way too frequently.

No kid should fear for their safety going to school, but how can they not?  We’re driving that fear home as we gate our schools out of desperation to keep our kids safe.  What wouldn’t we do when we all know another shooting is inevitable?

Our do-nothing state of politics is at center stage here, the product of deepening partisanship that has become untenable over the past decade.

In one corner, we have a radicalized Republican party that openly flirts with white supremacy.  Gun rights seem firmly entrenched in the conservative identity, and the party exploits fears over gun bans to sow resentment toward the government.  Maybe one day we’ll need those guns to overthrow the government, right?

Sadly this is rhetoric meant to distract from other goals.  Like absurd tax cuts for the wealthy and aggressive deregulation of industry.  Astoundingly, the distraction seems to work under Trump as conservatives sleepwalk through the pillaging of our country.

In the other corner, we have a Democratic party so hopelessly entrenched in corporate dollars that they fail to mount effective opposition to the most unpopular politician in the history of the US.  They’re too busy running away from progressive issues to notice they’ve been losing elections across the country.

Really you need look no further than Democratic leadership like Senate minority doormat Chuck Schumer, who was once affectionately referred to as the other Senator of Wall Street, to understand why no one trusts the party.  In 2008, banks deemed to big to fail blew up the economy, yet 16 Democratic Senators just voted to rollback the meager protections of Dodd-Frank.

I could go on, but incompetence and corruption basically covers the field for both parties.

Both sides stake out opposition on wedge issues like the Second Amendment.  Somehow nothing ever gets done because gridlock is business as usual in Washington, DC.  Neither party has a real interest in solving this epidemic because the status quo works for them.

Worse, neither side is ever held accountable for their failures.  Ineffective leaders get sent back to Congress at a 90% re-election rate because of our broken two party system.  Each side blames the other for being worse and the cycle repeats ad infinitum.

So the prospect that anything was going to get done in the wake of Parkland was dismal.  America watched the inevitable play out in the Florida legislature.  A photographer poignantly captured an MSD student crying as she watched the unthinkable betrayal by elected officials.

Further into the land of absurdity, we watched as our president surprisingly pondered an assault weapon ban but then inexplicably decided to arm teachers instead after meeting with the NRA.  Because logically gun sales are the answer to the problem of too many gun deaths.

Backstage NRA puppeteers smiled as they tugged Trump back on message.

Resilience in the Face of Opposition

But here’s the curveball.  Those kids from MSD refused to give up the spotlight.  They stayed on message and rallied bipartisan support behind them.

After all, sympathy was on their side.  Why would they stop?  Seventeen close them died, both peers and teachers, which for most would seem like justification for the students to not only speak out but to scream at the top of their lungs for change.  And boy were they  prepared to talk about the issue in a substantive way.

As we all know, there is no shelter in thoughts and prayers.  Not from bullets.  Not in politics.  The elected officials who refused to address the issue made it public what kind of animal they were.  In front of a hostile crowd, Marco Rubio refused to turn back money from the NRA.  In that moment, America recognized the disease gripping it.

To their credit, since February 14, these student activists have organized and articulated a sensible call for gun reform that has tightened focus on politicians who have refused to do anything.  The movement peaked last weekend with the March for our Lives.

The unrelenting spirit of these students has led to personal attacks in recent days by politicians and pundits alike as the right wing hate machine revved up to full spin with the weekend march. 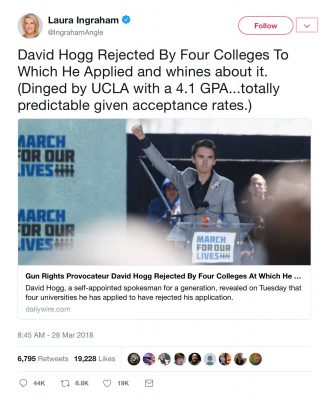 Surprisingly it wasn’t Ingraham who sank to homophobic slurs calling Emma Gonzalez “a skinhead lesbian.”  No, that was Ryan Petty of Maine who was running for a state seat (Source: Washington Post).  The operative word here is “was.”

All of these attacks have predictably backfired. First because these bright and articulate kids know how to turn a platform like Twitter against their opponents. 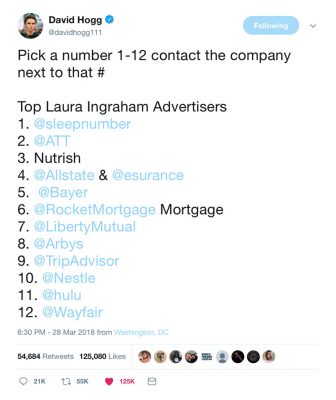 Most of the MSD students are still minors, and honestly there’s nothing more pathetic or offensive than attacking a kid.  That’s why the conspiracy theorists have tried to spin the students as crisis actors or the puppets of activist parents.  Or in the case of David Hogg, his FBI dad put him up to it because of an axe to grind with Trump.

No sane individual buys into these desperate attacks.  That’s why Steve King is now the subject of a House ethics complaint.  Laura Ingraham lost her biggest advertisers and has opted for vacation to escape controversy.  Ryan Petty bowed out of the race in Maine.

Maybe what we’re finally seeing is the diminishing returns of hate politics.  There’s only so long a party can make gains by playing on Americans fears and insecurities, right?  Maybe it was one time too many to the well for the NRA and its surrogates as they try desperately to shift the narrative away from the obvious source of the problem.

Make no mistake, GOP candidates realize how vulnerable they are.  Conservatives were already taking a beating with the chaotic Trump presidency dragging them down.  What they didn’t need was a pillar of conservative politics—the Second Amendment—falling prey to bipartisan scrutiny.

I’d hazzard a guess that in the wake of the March for our Lives, the NRA is no longer smiling behind the scenes.

The Power of Privilege Put to Use

Another key point about Parkland is that it’s an affluent community.  These student activists had access to an excellent education which they’ve clearly put to use in the best ways.

One of the most uplifting aspects of this story has been MSD student reaching out and lending their voice to minority groups like the Peace Warriors in Chicago that have largely been ignored.

These kids understand the intersectionality of gun violence and that speaks to the nature of their education.  Marjory Stoneman Douglass HS should be proud to have these kids speaking to the world.  It reflects so well on the school and community.