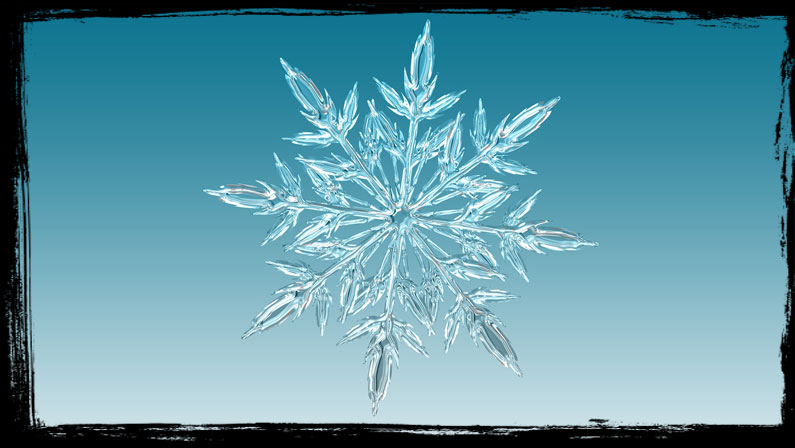 A curious thing happened the other day. Not once but twice I ran into conservatives crying hypocrisy. The repetition of that specific word struck me because until recently I’ve seldom heard it from the right. It smacks of a talking point that bubbled up in the echo chamber of right wing media. 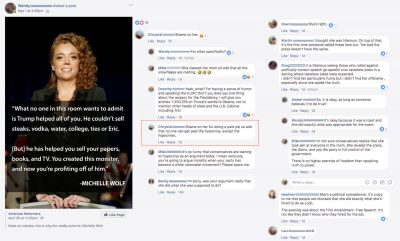 MICHELLE IS A WOLF

The first incident happened on a friend’s Facebook page in a thread praising Michelle Wolf’s performance at the White House Correspondent’s Dinner. If you watch her entire set, which is 20 minutes long and well worth the time, it’s evident that Wolf roasted all quarters of the room.

As only the fifth woman to host the event, she masterfully threw shade at the media for secretly loving the clickbait Trump provides. She mocked the Democratic Party for its ineptitude as the Resistance. And, of course, she called out the GOP for its tenuous grasp on reality and propensity to lie. She spared no one, not even herself.

Wolf started hot and clearly had the crowd laughing with her. To the audience, her set seemed like good fun, even as she described how the press gets worked up over Trump.

I know there’s a lot of people that want me to talk about Russia and Putin and collusion, but I’m not going to do that because there’s also a lot of liberal media here and I’ve never really wanted to know what any of you look like when you orgasm. Except for you Jake Tapper. I bet it’s something like this. “Okay, that’s all the time we have.”

But when her attention swung to the women in the Trump administration, the crowd grew less comfortable by the minute.  Why?  Because she had the audacity to calls out serial liars to their faces?

There’s Kellyanne Conway. Man, she has the perfect last name for what she does. Conway. It’s like if my name was Michelle Jokes Frizzy Hair Small Tits.

You guys have got to stop putting Kellyanne on your shows. All she does is lie. If you don’t give her a platform, she has nowhere to lie.

The room turned on her somewhere between Conway and Sarah Huckabee Sanders, and it’s interesting to consider not just the timing but also what prompted the shift.

Wolf’s routine was consistent throughout, a mix of cutting jokes and all too obvious truth.  Clearly she set alight the veneer of polite society that usually dominates the WHCD, but that’s been done before.

Why would anyone expect less than full roast from a political comedienne brought in to “speak truth to power?”  The level of offense seemed disproportionate to the circumstances.

I actually really like Sarah. I think she’s very resourceful. She burns facts, and then she uses that ash to create a perfect smoky eye. Like maybe she’s born with it, maybe it’s lies. It’s probably lies.

Much like the right wing spin-machine after the event, the mainstream media went over the top to paint a picture that defied reality.

Obviously we can all see for ourselves what was said in the video and transcripts of the event. Wolf was calling out “despicable behavior” not making fun of appearance as criticism of her so hyperbolically suggested.

If at times she wasn’t funny, it was because she hewed too close to the ugliness hanging over us all.  For main street America, that offered catharsis.  For the powerful and elite, not so much.

It wasn’t all funny, nor should it be. Flint still doesn’t have clean water. To her credit, Wolf never forgot that.

It’s easy to write off the over the top response to the inability to laugh at oneself and thin skin, like with Mika Brzezinski and her “#metoo moment” that worked out.

Honestly, the offense we’re witnessing seems more like convenient cover. It obscurs the overarching theme of Wolf’s set: the codependence of the political and media elite.

When viewed through the lens of the political class, it becomes all too clear why the White House Correspondents Association and the Republican are standing on the same side of the issue. How dare Michelle Wolf expose their cozy relationship?

TIRELESS CHAMPION OF THE RULE OF LAW

My second run-in with “hypocrisy” came in reply to a John Scalzi Tweet.

Scalzi used his platform to call out Mike Pence and Joe Arpaio on their shared bigotry after Pence publicly praised the disgraced sheriff / pardoned felon who is now running for a Senate seat. 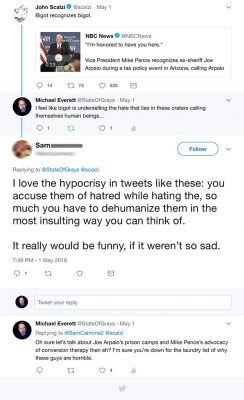 As sheriff of Maricopa County, Arpaio was a champion of racial profiling.  His department regularly pulled people over because they weren’t white. To accommodate his aggressive policies, he created an open air prison camp in the Arizona heat.  He had to stow all the people he was arresting somewhere right?  He held people in inhumane conditions without due process in an ugly abuse of law enforcement power.

Ultimately he was convicted of criminal contempt for defying court orders to cease and desist racial profiling. He was held accountable for openly defying the courts and making racism the law of the land until he was pardoned by Donald Trump.

This is nothing new for Arpaio who also who used government money in a Birther crusade, traveling to Hawaii to prove that Barack Obama wasn’t a citizen of the United States.

Joe Arpaio is a white supremacist. He deserves no sympathy, no benefit of the doubt.

Pence, of course, had a similar record of public discrimination against the LGBT community as the governor of Indiana. He pushed the Religious Freedom Restoration Act (RFRA), a bill that would allow businesses to discriminate based on religious belief.

He’s a religious extremist who advocated for conversion therapy of homosexuals.  Basically psychologically torturing the gay out of people.  And his discriminatory behavior continued into the White House.

As you can see from my comment, I thought Scalzi was being too nice. Both men are something more than casual bigots. They are two of the most destructive politicians in the US. They put lives at risk through their hateful agenda.

Why would anyone stoop to defend these men?

This is the slippery slope of modern conservative thinking, logic so binary in nature it leaves zero room for nuance. You have to be this or that and nowhere in between. Conservatives apply purity tests to their ranks for this very reason. Anyone who thinks differently is labeled a RINO (Republican In Name Only) and ostracized.

The notion of liberal intolerance leads to false equivalency. Because I don’t tolerate racism, I must be intolerant. Obviously I’m as bad as that racist sheriff and a homophobic Veep.  Or because I don’t condemn what some view as an attack on a woman’s appearance I’m a hypocrite.  Please.

Making the leap to hypocrisy is important because once we’re there, the listening stops. It’s an excuse and an innoculation against discourse. The perfect rhetorical defense to maintain purity of conservative thought, because god forbid that anyone in the conservative ranks opens their mind and starts thinking for themselves.

I see this kind of duck and cover constantly in partisan interaction online and in the real world.  Conservatives gets worked up and *have* to say something.  When presented with a counter argument, they cut and run, or worse just completely ignore facts.  Why?  Because the dissonance is so great their head might explode?

So where did the concept of liberal intolerance bubble up from?

As best as I can tell, the talking point gained traction last year and seems to have roots at the Heritage Foundation.  Kim Holmes, an executive VP at Heritage, even wrote a book about it: The Closing of the Liberal Mind: How Groupthink and Intolerance Define the Left.

Trust me, you’ll hear violins in the background as you peruse the straw man argument he presents as he deigns to speak for civilized society against the brutishness of faux liberalism.

Conservative think tanks like Heritage serve as the branding engine of the Republican Party.  They’re the smart guys who tell the idiots what to think.  If you follow politics with any objective interest, you’ve probably seen how ideas flow from Heritage to the masses.

Drill down deeper and you’ll see how the language of conservatism is propagated out through partisan media.  For example, a search for “hypocrisy” on FOX News returned 2493 results.  By contrast the same search netted 630 results on CNN and 445 on MSNBC.  The numbers play out similarly for “intolerance.”  Is it a coincidence that there’s such an emphasis on this language in conservative media?

Interestingly, white nationalists like Richard Spencer have leveraged this idea of liberal intolerance to build a platform at universities across the country.  For some inexplicable reason, Universities keep cratering to arguments of equal time for Nazis.  It’s very strange, but cuts to the heart of what conservatives want when arguing liberal intolerance.  They want liberals to twist themselves into knots.

Holmes talks dismissively about the radical right but as we’ve seen from the Tea Party movement forward, hate mongers like Richard Spencer, Milo Yiannopoulos and their ilk have been an advanced front in cultural warfare.  Institutions like Heritage need to be viewed in the light of the reactionary politics they enable.

Looking back, I realize that I probably sound a little like Michelle Wolf dressing down the WHCD, but trust me I’m a meanie pants for a reason.

If left unchecked, this nonsense spreads like a virus, especially today when radical ideologies are embraced and embodied by leading figures in the Trump administration.  Quite frankly, our “president” has mainstreamed racism and emboldened bigots everywhere.

But this isn’t a partisan position for me because the spin machine happens on the left too.  They have their own neoliberal think tanks, and I call that shit out just as readily.  I have spent entirely too much time conversing with Clinton supporters who can’t seem to talk issues.

I’m a firm believer in calling out bullshit wherever it comes from. When someone does something so ridiculous as to fly in the face of reason, it does not deserve equal time or consideration.

The list goes on.  There’s so much stupid to reject.  Join me in calling it out.