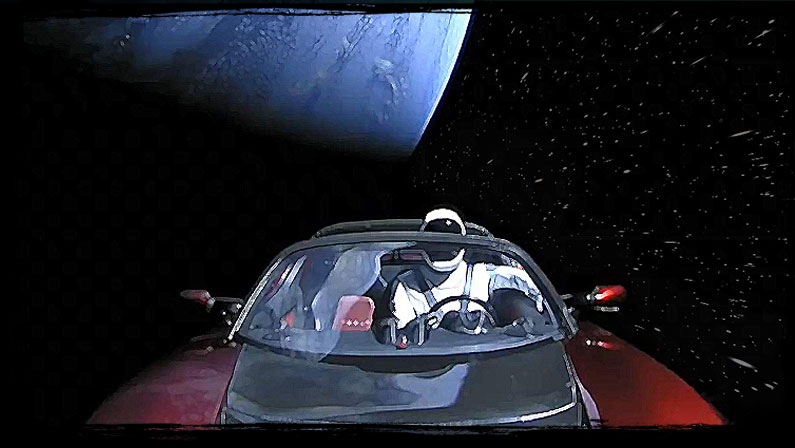 Why We Dream of Space

Last week the world witnessed a spectacle courtesy of Elon Musk and SpaceX.

There’s a lot to unpack in the Falcon Heavy launch, but for me it was a moment of exhilaration, proof of what humanity is capable of when we dream of big things. We are not bound to this Earth; there’s more out there for us as a species.

Falcon Heavy came as a cool, quenching sip of inspiration in the desert of ignorance that our political landscape has become.

Lets be honest, the last year has taken it’s toll. We’re governed by those who reject scientific fact and elevate fringe lunacy for political gain. Day after day, it wears on all of us, especially those strapped to a computer trying to produce creatively.

The Falcon Heavy launch was the brazen display of science that humanity needed at this moment in time. It was like a giant, flaming middle finger of science rocketing to the heavens.

While no doubt some aberrant few will cling to flat earth fantasies and insist that this was all an elaborate ruse—I’ve seen it in the last week; I’m sure you have as well—the rest of us can find solace in a spectacle like this.

Science means something. Science is tangible. It takes us places. It gets things done.

Set aside the publicity stunt, which some have called the greatest car commercial ever. It’s a mistake to focus on the test payload—and that’s what the car was—when there’s more to glean in the details.

Elon Musk dubbed his spacesuit Starman, an obvious reference to David Bowie, and sent it off listening to “Space Oddity.” Lit on the dashboard, “Don’t Panic” served as a wink and a nod to readers of Douglas Adams’ Hitchhiker’s Guide to the Galaxy. Also along for the ride were digital works that included Isaac Asimov’s Foundation trilogy. These were all authentic gestures that hint at Musk’s personal influences.

Science and art intertwined, isn’t that the way it should be? Art inspires science as science inspires art. It’s a cycle worth following. It’s what will get us to the stars someday.